I had an ice Saturday. How about you?

Yesterday I took a little road trip to Door County in hopes of finding some inspiration for Week 4 in the photography challenge I am taking part in.  This week’s challenge involves the combination of a landscape and symmetry.  Alas, I did not find exactly that, but I did find some inspiration.

There are a lot of things to do in Door County, WI.  There’s plenty of food to track down and plenty of parks to visit.  There are several county parks and state parks within the county because the land basically begs to be appreciated in such a way.  If you’ve never been to Door County, let me describe it to you physically.  There’s everything from sandy beaches, rocky cliffs, wetlands, coniferous forests, lakes, and all kinds of coastline.  In other words, there’s a lot going on there.  That’s a result of the work done by the glaciers more than 10,000 years ago.  It’s unique and I love it for that.

One of my favorite spots to visit is Cave Point County Park which is located in the east side of the Door Peninsula, 25 minutes outside of Sturgeon Bay.  The park itself is located within a state park called Whitefish Dunes State Park (I told you there were a ton of parks).  The park is open year round and is home to one of the rocky shores lined with cliffs and one titular coastal cave.

The cave in question is quite the site, any time of the year.  The cave causes quite the violent splashes because of physics or something.  I can’t properly describe it other than it seems like the waves crash a lot harder and louder near the cave.  The whole shore in the park is hit by the waves of Lake Michigan all winter long.  When we have a real cold spell, like the polar vortex, it causes some real cool things with ice.  I probably shouldn’t talk about it so much as show you…

First, here’s a look along the shore of the park.  You can definitely see what I was talking about.  All that splashed water makes for a beautiful scene that even Mr. Freeze would be envious of. 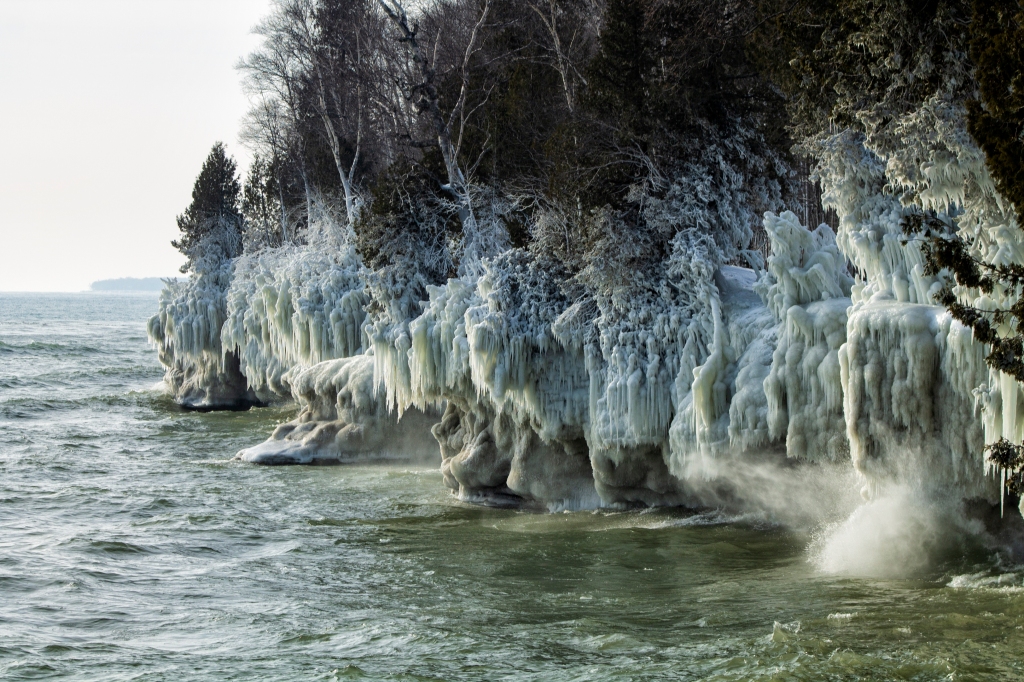 It’s all on there real thick, too.   The ice extends onto the ground several feet inland as well.  I had to be quite careful as I am terrified of water and the shore here is three notches more terrifying with the waves and extreme cold.

The trees near the shore become beautiful hosts for icicles.  I saw the ice on trees right on the shore to all the way back 15-20 feet.  I’d imagine the high winds during the vortex caused the icy art on the trees farther inland. 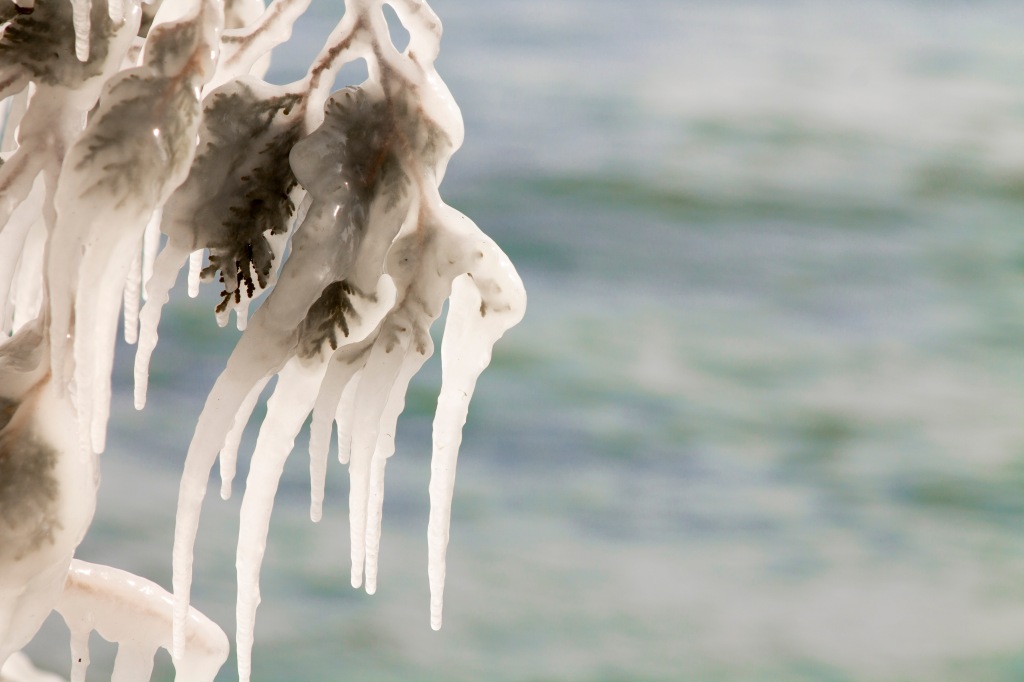 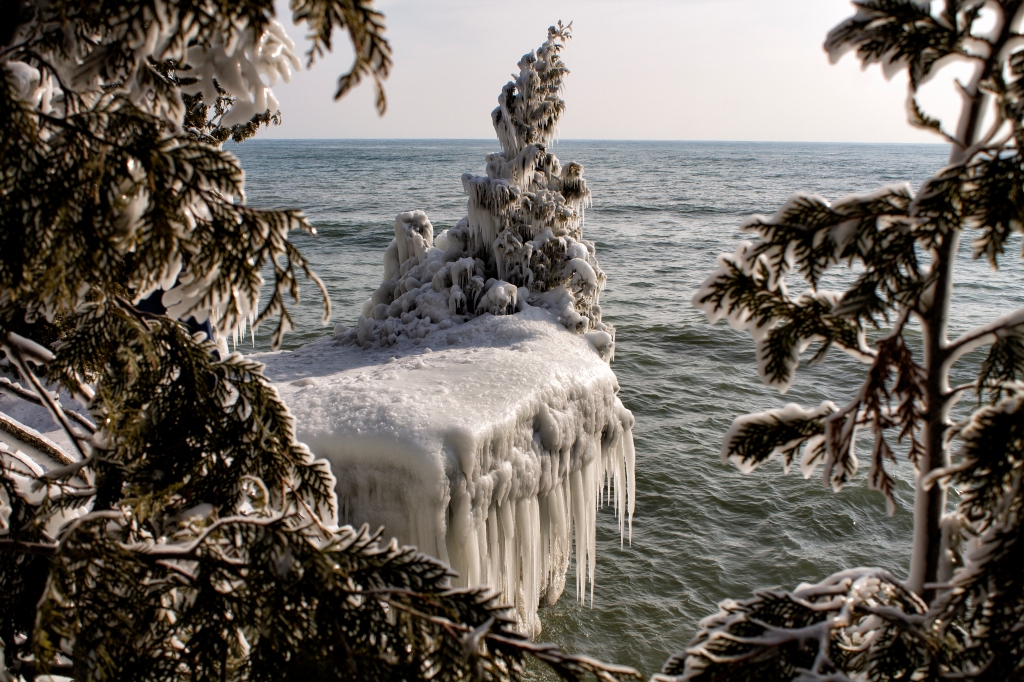 With all the ice and the sun shining bright, I had to try to shoot something that showcased both.  So, here’s one attempt at that:

I also liked that one in black and white: 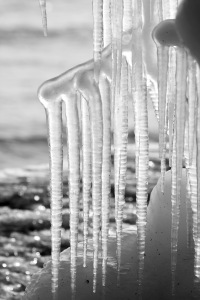 Here’s one with a little more reference to where this was in relation to the water:

And here’s what happens when you play with the white balance in post production: 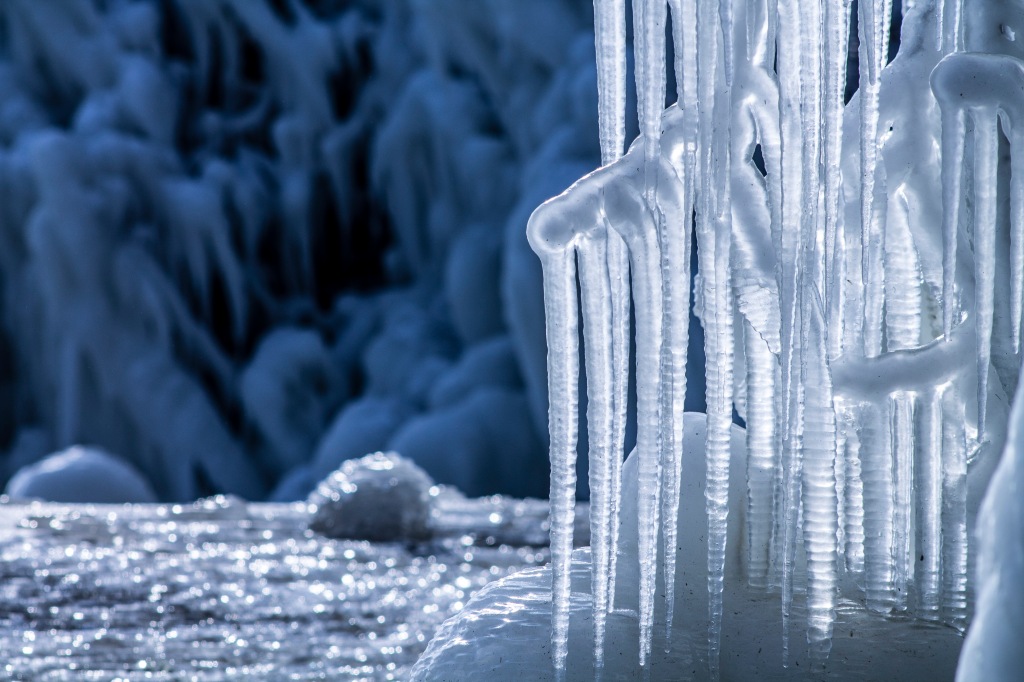 And here’s one more that I took at the shore in Bailey’s Harbor (20 min north of Cave Point).  I like it for the pattern and repetition.

Thanks for humoring me and looking at these.  Let me know what you think.  My camera is an old one now and it still does a decent job if I know what I am doing.